Force beefs up with Harvey Beef

Harvey Beef is delighted to announce we are the Principal Partner of the Western Force for the 2021 Super Rugby AU campaign.

The deal will see Harvey Beef’s logo displayed front and centre on both the home and away jerseys, as well as training wear, throughout the historic Super Rugby AU season ahead. 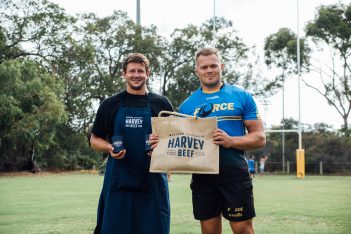 Partnering with a proudly WA-owned company with deep community roots is part of the Force’s commitment to supporting WA, its people and the organisations that have helped make our state what it is today.

David Pitts, Western Force’s Head of Commercial Operations, said it was a key priority for the Force to continue to align with homegrown WA businesses that pride themselves on quality.

“Harvey Beef is a premium brand with a rich heritage spanning over 100 years, so we’re thrilled to be partnering with them and count on their support as we enter an exciting new era in our club’s history,” Mr Pitts said.

Paul Slaughter, CEO of Harvest Road, said the partnership with the Force represented a positive opportunity for both brands with each sharing a commitment to the Western Australian community.

“We are very excited that Harvey Beef will be on the front of the Western Force jersey this season and behind the team all year,” Mr Slaughter said.

“The beef and rugby loving communities of Western Australia will now be able to enjoy their favourite things together as we create incredible experiences for Western Force fans, on and off the field.”

The newly branded jerseys featuring the Harvey Beef logo will be revealed to the public at the club’s season launch event on 17 February.

They will be worn for the first time in the blockbuster season opener against the reigning Super Rugby AU champions, the ACT Brumbies, on Friday 19 February at HBF Park with kick-off at 6:55pm.